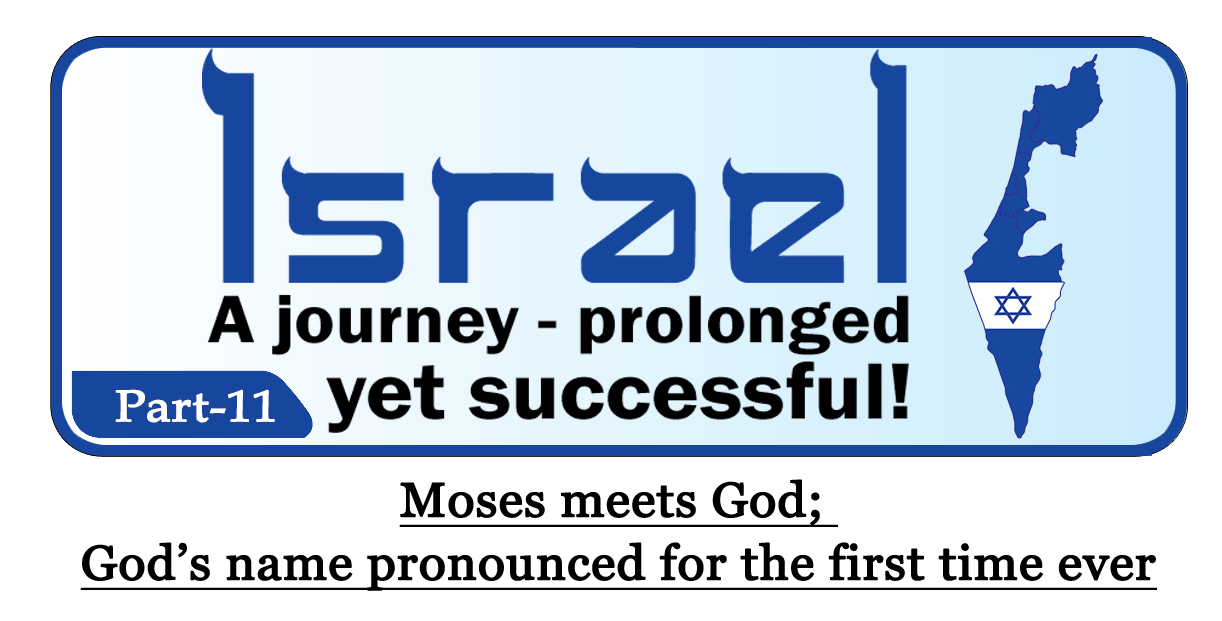 Moses was now 40. His inborn virtue of righteousness added to his compassion for his Jewish brethren had already made Moses their leader, their torchbearer. He began to seriously contemplate over the atrocities they faced at the hands of the Egyptians then. With the thought of freeing his Jewish brethren from these atrocities always on his mind, Moses found himself constantly engaged in deliberating over ways to achieve the purpose. But the enslaved Jews that the Pharaoh held tight in his iron grip on the one hand and rendered helpless on the whole due to the prevailing social order on the other, made it near impossible for Moses to find any way out. At this precarious moment he had nowhere to turn to but God, about Whom he had learnt as much from his mother while he grew up as from traditional knowledge of the Jews.

It was around this time that a very strange yet remarkable incident occurred. Like any other day, Moses had been to the land of Goshen where his Jewish brethren continued their daily toil under slavery. It was customary for one Egyptian supervisor to oversee the work of some ten-twenty Jews. Getting the assigned work done was the supervisor’s responsibility and that he executed threatening them with whiplashes.

That was a usual day and so it was going to unfold the same story. In one particular place, one of the supervisors was found to whip mercilessly, a tired Jew, too drained and worn out to work. Moses felt himself seething with rage. In the dead of night, when all were asleep, he accosted the supervisor on a lonely road and thrashed him so much that the supervisor died. Moses dug a deep grave by the seaside and buried the supervisor’s body but this, evidently, proved inadequate precaution and the news did finally reach the Pharaoh. Enraged, the Pharaoh sentenced Moses to death. However, Moses had already seen it coming and so he fled the country. (There are some stories which say that when the executioner was about to decapitate Moses by his neck, his axe bounced off Moses’s neck and he was saved as God was protecting him and had accordingly made his neck hard like a tower of ivory. Moses is said to have escaped in the chaos that ensued).

Having fled from Egypt, Moses reached the city of Midian. The Midianites are said to have been the descendants of ‘Midian’, who was the son of Abraham and his third-wife Keturah.

For Moses, life began afresh in Midian. With the sword of the death sentence hanging over his head, Moses was not going to be able to return to Egypt; at least not for the time being. Thus Midian now became his place of work. Eventually, Moses married Zipporah and they had two sons, who were named ‘Gershom’ and ‘Eliezer’.

In Midian, Moses stayed for a good forty years. His main source of livelihood during his stay at his in-laws’ house, was grazing their flocks, apart from some other sundry jobs.

But the divine plan in place for Moses was following its own course. All that was needed was the right moment….

…. it was then that it occurred, the incident that was to shape the destiny of the Jews!

One day it so happened that from among the flocks that he took grazing, Moses found one of the lambs missing. He began looking for it. While he wandered, he heard its bleat. Following the sound of the bleat Moses climbed ‘Mount Horeb’ and found the lamb there. As he was about to climb down with the lamb, his glance fell on something very queer.

Moses saw flames of fire emerging from a nearby bush but strangely they were not burning the bush down. Dumbstruck, Moses stood as if riveted to the ground. A little while later, he heard a voice from the bush and the voice called out his name – “Moses…. Moses!”

Still speechless and gobsmacked, as Moses tried to go near the bush to find out what exactly was happening, the voice introduced itself. It was ‘He’ …The God of Abraham-Isaac-Jacob. Telling Moses that the land he was standing on was holy, God asked him to remove his footwear. At first, Moses could not believe his ears. The One his mother had spoken to him since he was a child, the One the ancient knowledge of the Jews had acquainted him with…. was actually One talking to him! God was talking to him!

God said to Moses that He was watching the hardships of his Israelite children. These hardships were soon to end and this task would be accomplished through none other than Moses, God said. God commanded Moses to return to Egypt, meet the Pharaoh, tell him that he was leaving Egypt along with his Jewish brethren and also ask him to free them of bondage and slavery.

Moses was a bit sceptical if he would be able to discharge such a big responsibility. He also wondered why the all-powerful Pharaoh would even bother to entertain a commoner like him. Moreover, the sword of the death sentence announced by the same Pharaoh was also hanging over his head. Still apprehensive, Moses voiced his doubts but God put all of them to rest. Then Moses pointed out that he had a speech defect which could hinder communication with the Pharaoh. To this, God commanded that Moses’s brother, Aaron would talk to the Pharaoh on his behalf and then He finally and clearly commanded Moses, ‘It is through you that the work of freeing the Jews from the slavery and bondage in Egypt is to be accomplished’.

So then Moses asked a final question, “When I go to the Israelites and say to them, that ‘I met God’, will they believe me? Do let me know your name, so I can tell them.”

It was then that the God, the God, who had met Abraham and his heirs in their visions, declared His name for the very first time – “Yahweh!” (YHWH) which in Hebrew means the ‘Supreme God’. (To be continued…)